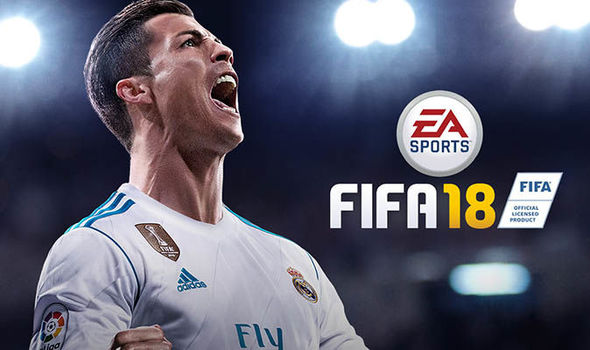 If you picked up Fifa 18 you’ve probably noticed the absence of defensive play within the game. Your only option is to hope your A.I defenders intercept a pass long before your opposition has even reached your side of the field. After many frustrating matches, 14 to be exact, I found myself in dismay at the players inability to make any sort of defensive front against nameless players and Ronaldo himself. A full review on the game will come later after I have more playtime under my belt. Today I thought to myself, what can I change to fill the gap in my current strategy? Out of what could’ve been anger or curiosity, I decided to remove my entire defensive back line, subbing in only attacking strikers and midfielders.

I decided to not get too crazy and allowed Bailly to remain in the lineup for good measure. After feeling satisfied with my shenanigans I made my way into my first online match of the night against PSG.

My first bout included a tough match up with PSG but with a gamertag like BoBoFett32 I figured I was in for an easy win. The match started out like any other with a crazy attempt at a breakaway down the field to kick off the match. Eleven minutes in I turned  off my television and sprinted downfield, tapping the X button before smashing the B for a header.

For a short moment I felt in control of the match with a goal up so early in the game but suddenly my Xbox felt it was time to play tricks on me. My lovely device attempted to update six different games and would continue to queue up game after game update, making it impossible to make any sort of resemblance of a defensive stand.

“Oh shit Gears of War 2 needs an update, this seems like as good time as any for an update!” – My Xbox

Eventually I was able to play the game without hitting the home button every two minutes and something incredible happened, I scored, truly incredible work.

The volley came through for me once again and  I saw the light, the light of victory. That light soon vanished and it became quite evident that I am doomed into the pleb 8th Division for the rest of eternity, until this happened.

And my life was once again reduced to nothing, I’d like to point out that there was no card given on that play. Classic. This continued until the end of the match, a tie for the beginning of a saga. Even with a tie I felt successful in my 3-1 comback draw.

On to the next one. This truly was a frivolous bout between two evenly matched opponents, we fought hard through the 17th minute before being suddenly disconnected, surprisingly enough I was chosen the victor with a 3-0 score.

Manchester United 3 – 0 Chelsea (According to the computers simulation)

With game three I faced the classic, “I play whatever team is on the cover” player and knew it would be a tall task to defeat them. The match started out decent with a laughable goal from me but my opponent continued to bring the hammer, outrunning every “defender” I had and rebounding the ball after it was tapped away from them. I’d like to blame this one on the lag found throughout the match but Real Madrid’s attacking power is too much, one tap to Ronaldo can ruin any lads day as you strive for the cup.

I played my heart out on defense but to no avail, its as though my team forgot how to clear the ball. This kind of play continued until the match ended 1-4.

Leading into the game I nearly cried out in praise of the Fifa Gods for not supplying me with another Real Madrid player. My opponent kicked off the game with two quick goals but quickly found himself the victim of a blitz from Lukaku, allowing me to sneak  back into the match.

A mere 12′ later I found myself on the losing end as he scored on David De Gea. During the entire match my opponent shot from outside the 18 yard line thirteen times and De Gea did not catch the ball a single time. Sources confirmed later that he forgot how to catch the ball prior to the match. The opposing goalie only deflected 3 of my 13 shots, catching the rest. The game looked grim at the 45′ minute mark with glorious Man U down 3-1 but no fear, Lukaku is here. Once again I blitzed down the field with Lukaku seamlessly gliding away from defenders.

The match continued to be a stalemate, an unstoppable force against an immovable object, pushing both sides into desperate attempts at goal. My defense had grown lackadaisical and had a scare around the 50′ mark as lag continued to plague my online experience.

Crossing in Fifa 18 can be quite difficult at times and I was surprised when my foot connected with a decent cross. From this point on I thought I had the game under control and would soon walk away with a victory.

As if I needed anymore reason to discontinue the treachery found on Fifa 18, I find myself matched with Real Madrid. A smile crept across my face as I was oh so excited to begin the match against my nemesis. /s Loading into the match I could already tell my opponents router was located under his fridge.

The match started off like any other with my opponent popping off a goal with the king himself. I soon answer and feel on top of the world, a very, very small world.

My nemesis bounces back with two quick goals, gaining a 3-1 lead over my defenseless team. He did allow me to get another goal before truly crushing my dreams, reducing the lead to 3-2.

For a nanosecond I felt like I was back in the match, this was the game I’d beat Real Madrid. Then the scoring began, one after the other. Goal by goal my opponent dissected my team and entirely dismantled me winning 5-2.

I dropped out of the match so quickly it was like I was never there.

I did manage to beat Real Madrid the next day.

View all posts by Geoff W